The Most Amazing Quote in the World

The night before last I had a dream, where I came up with what can only be described as the most amazing quote in the world. In a brief moment of lucidity, knowing I was dreaming, I dismissed the annoying dancing monkeys and pool playing imps, forcing myself to wake up so I could memorise this amazing quote. I felt exhilarated and elated. This quote was incredible. I felt I had discovered a great gift, so powerful it could blow a man over with its intellectual might. It was no more than two lines, a subtle play on words, yet of such sharpness that it could have been an almost invisible piece of Japanese steel folded 400 times and given to a sword master to demonstrate the beauty of slicing a human hair lengthways.

As I lay in the dark, open eyed, but looking up into the inky blackness of the bedroom ceiling, I pondered, should I write this down? Maybe read it out and quote it into my iphone dictation thingy. But I was sure I would remember. I closed my eyes, reciting the quote again and again in my mind until I fell into a fitful sleep. I was awake again before the night was over, the quote on my lips, in my mind again, I held onto to it tight, like a chubby cherub with a chicken drumstick. I wasn’t going to let it go. I would be the new Oscar Wilde. So I slept soundly this time. When I awoke in the morning however, I’d forgotten it completely. Useless cock.
Posted by Mel at 17:34 1 comment:

Last week, we went on our re-arranged Christmas team night out. Marylebone is a fantastic part of London, quirky shops, great food, atmospheric pubs. Seems to have retained it’s own character and hasn’t been swallowed up by the tourist trap that is Oxford Street just down the road.
I’ve been to quite a few pubs in the area, but by far the oddest, and not necessarily in a bad way, just from a curious social history perspective (as it’s stuck in 1943) is the Golden Eagle. It’s a proper pub or as it’s described in some quarters an “imbibing emporium”. Observe this contemporary scene.

On a “sing song” night, Tony “Fingers” Pearson wedges himself up in the corner of the pub, with his little Piano and tinkers out some classic songs (example – Moon River) and he is joined by up to a dozen dapper old chaps (some of whom wear cravats) who sing along. Occasionally a heavily made up and dyed of hair gin mother will join in, wearing some inappropriate fur wrap from some extinct mammal, but predominately, this is an old bloke thing.
There are all sorts of duffers in there, brylcreamed spivs, upper class dandies, rotund claret swiggers , dark suited heavies and jovial brick fisted navvies wearing their sunday best all singing along.
It’s quite friendly though, even if you wear clothing from the modern era and don’t talk like a minor character from an Ealing comedy.
I like it, it’s got character, others haven’t been so kind, one reviewer amusingly wrote :
“This is a creepy looking pub, it has the air of it being a living museum exhibit, i almost thought this was a set from little Britain. I've never seen so many misfits under one roof*, this place has an eerie air of unreality about it, It left me feeling quite depressed it was lucky I wasn't their when the pianist was playing, that would have freaked me out.”
*- I was probably in that day. And another wrote unfairly :
“This truly was a godforsaken place: the furniture looked like it had been bought from Steptoe & Son, the barman was as about as welcoming as a Death-Eater and the monged-out clientele looked like they hadn’t shifted since Thatcherism.”
(not fair in my opinion, they don’t know who Thatcher is after all)
And finally something positive, shouted out in capital letters :
“IT SERVES GREAT SAUSAGES”
Interestingly, my boss did tell me he took some Japanese visitors to the pub and they got a frosty reception. Probably because we are still at war right?
One of the weirdest things is the toilets though as you go downstairs and enter a perfectly normal corridor, but the corridor shrinks as you walk down it, like Alice in Wonderland, so you are almost squeezing yourself through a hatch to get into the loos. Being hobbit sized, I was surprised to find my afro flicking against the door frame as I walked in.
Anyway, try it for an experience, don’t let the bad reviews put you off, it’s a feel good place. And for any single guys, I suggest going dressed as an American Airman and try to hook yourself up with a 90 year old cockney sparrow. Make sure you use your impeccable Southern manners though.
Ps – If you are wondering about the art, it’s called Gin Lane, by Hogarth, an 18th Century Artist, Satirist and proto-comic book creator...
Posted by Mel at 00:55 No comments:

The World At War

I was watching one of the history channels the other night as I am oft to do. And the ground breaking and possibly the best TV series on the second world war was being shown. The World At War.
It has the gravitas, the meticulous detail, the big name narrator (Sir Laurence Olivier) and incredible interviews with some of the big players from the era.
26 one hour episodes of captivating, harrowing stuff, without any glamorisation and using incredible original footage. It took four years to film and produce such was the effort put in to bring it to the small screen. Anyone would have thought it was made by the BBC, but it wasn’t, this came from Thames TV, whose claims to fame included such guff as the Benny Hill Show and Love Thy Neighbour…
Watching it as a young kid I was frightened and moved by the chilling opening credits. The music was particularly disconcerting accompanied by the photographs of peoples faces, burning and melting into ashes. It used to terrify me, but I couldn’t avert my eyes. (To be fair, other things used to terrify me too, like my big brothers Pink Floyd album (Meddle) and one of the dinner ladies at my school who had a moustache)
I used to consider and wonder who those people in the photographs were, when did they die, what their names were, where were they from, whether they were happy in life, whether the war interrupted their happiness, whether anyone loved or remembered them. As a kid, it’s almost too big a concept to contemplate the transient nature of mortality, but it stayed with me. 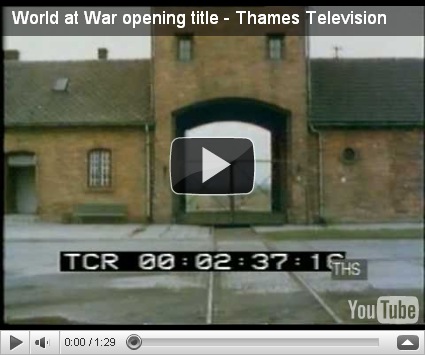