Charmed Lives in Greece at the British Museum

I visited the British Museum with my brother this week, taking the day off on my birthday. A combination of it being the beginning of the Easter school holidays and a rainy day driving tourists and locals alike to pursue indoor leisure activities meant the museum was heaving. The dank smell of wet clothes hung in the air, even in the bright, high ceilinged central space of the Great Court.

A little Oasis of calm however, and the reason for my visit, were the galleries dedicated to a touching friendship of three men which lasted decades. Charmed Lives in Greece centers on the artists Nikos Hadjikyriakos-Ghikas and John Craxton and the writer and adventurer Patrick Leigh-Fermor.

They were very different in many ways, but what they shared was a lust for life, for joy and for keeping an open mind, never ceasing to learn about the world and to learn from the people they came across, be they princes or peasants. There seemed to be no arrogance about them, and both Craxton and Leigh-Fermor added themselves to that long line of those peculiarly revered eccentric English people in Greece, going back to Byron, drawn by the classics but on arrival opening their eyes to so much more. They threw themselves wholeheartedly into the society, assimilating and ingratiating themselves with the locals, learning the language, the songs and customs and becoming universally loved in their adopted country of Greece.

As well as a narrative of their individual journeys in life, it captures their times together in various parts of Greece, be it Hydra, Kardamyli, Chania or Corfu.

This is achieved through paintings, illustrations, photographs, letters, books with hand written dedications and personal items, such as Leigh-Fermor’s typewriter and his photographer wife Joan’s camera whose work is also well represented in this exhibition.

Ghikas’ art looks to come from within, even when painting a landscape, there is something of the inner dream about it. It feels personal, and as this short film states, he was more of an introvert compared to his English friends. 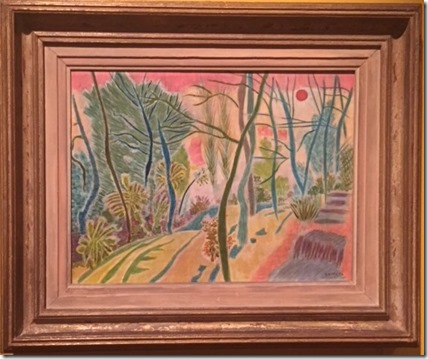 And although quite similar in terms of their use of geometric forms and nods to cubism, there is an exuberance in Craxton’s work, an energy, sometimes a sexual energy, celebrating the working people of Greece, be they shepherds straining to quell sinewy goats in the mountains, or doleful sailors enjoying a meal and a cigarette in a rowdy taverna. Young men. And cats. Lots of cats, a passion he shared with Joan Leigh-Fermor (Patrick was less enthusiastic about felines). My brother was convinced he’d seen Craxton’s work before, in his Greek school study book from when he was a child. It seemed very apt and also a little subversive that these snapshots of working class life were celebrated in an otherwise cheerless textbook. I hope this is true as it’s a wonderful anecdote that the most memorable aspect of learning Greek was Craxton’s evocative art! (Neither me or my siblings are particularly proficient at Greek, we get by…) 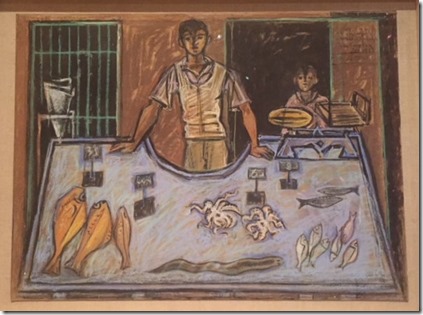 Finally there’s Patrick Leigh-Fermor, the rebellious, heroic charmer who captured a German General along with his Greek resistance friends in Crete in World War 2. I’ve read “A Time of Gifts”, the first of three volumes, charting his walk from Rotterdam to Constantinople aged 18 in the early 1930s. He’s a very engaging writer, very funny and you bound along with him on his journey. Craxton illustrated / designed the covers of all his books. It’s fascinating listening to Leigh-Fermor’s voice, speaking Greek, he speaks it like a local, with poetic narrative, not a bookish classicist, it made me smile.

It’s a wonderfully diverse, touching and balanced exhibition. And it’s free. At the British Museum until the 15th July.