I visited the National Portrait Gallery for the first time back in September, strangely it was somewhere I’d never ventured into before, but it’s a treasure trove of fantastic art.

I was there to catch the BP Portrait Award 2011 before it closed. As an amateur art lover, I wanted to see that portraiture was alive and well. And I was pleased to see it was. But I’m not going to dwell on that, the link gives some detail.

What really impressed me was the permanent exhibition and the historical context of the portraits of famous or infamous people. The sitter was invariably more significant, more well known, than the artist, but sometimes, both artist and sitter were giants.

I jotted down some notes, just some work which caught my eye.

- The sentimental simple portrait by Patrick Branwell Bronte (he was 17 when he painted it to be fair) of his three sisters Anne, Emily and Charlotte. It’s a bit rough around the edges, looked like it had been folded with worn off paint along the seams and flaked paint. I just imagined he painted this over a winter, when they were all holed up, getting on with their creative pursuits.

- William Morris by George Frederic Watts. Although Morris was full of cold sitting for this portrait and his wife Jane was probably off gallivanting with Rosetti, he still exudes an aura of primal  power. Like a green man, or a bear, there is something of the forest about him. William Morris was a genius, I think this portrait captures that.

- There was a painting of the polar explorer Shackleton. His steely gaze and set jaw shows he’s a fucking hard bastard. (I know, I know, these blogs always start off serious, then I degenerate, Ok, I’m reeling it in). Painted in 1921 by Eves, a year before Shackleton died, the then veteran explorer was renowned for showing incredible leadership of the otherwise failed “Imperial Trans-Antarctic Expedition” 1914-1917. What could have been a disaster ended up a magnificent triumph of survival. Not one of the men under his charge died.

- Emmeline Pankhurst by Georgina Agnes Brackenbury. 1927. There is a real warmth in this portrait. And perhaps a mischievous smugness. The old suffragette reflecting on her life’s hardships in being instrumental to bringing the right to vote to women. This is another portrait painted a year before the sitters death.

- Charles Darwin by John Collier, 1883. A third portrait taken from the year before the sitters (or standers in this case) death! It wasn’t deliberate, it was only when researching the works I hastily scribbled in my notebook, that this co-incidence came to light. Perhaps there is some resonance in accumulated wisdom which shines out of these portraits, the subject having achieved great feats in their lives. They’ve nothing more to prove, their confidence bringing the best out of the artist. I don’t know. But this portrait of Darwin is just magnificent. He shook the foundations of established science with his meticulously researched life’s work on evolution. It needed to be, otherwise the doubters would have torn him apart if it didn’t stand up to scrutiny. They tried, they lampooned him as an ape, but ultimately his theories and studies were accepted. As my wife just said, this portrait looks classical, this could be Socrates. His eyes just bore into you. What a geezer.

- And there were a number of portraits of Winston Churchill, the one I’d have love to have seen is the one painted by Graham Sutherland in 1954, commissioned by both the House of Commons and House of Lords, which Churchill hated… saying it made him look half witted. Churchill’s devoted wife Clementine had it destroyed it in 1956. Feel a bit sorry for Sutherland, he did create a number of preparatory pieces of work which did survive, including the one below, which I think carries both clout and a haunted air of a man who made massive decisions in his lifetime.

Sutherland (and I speculate, because I don’t know) was perhaps a leftfield choice, but his portraiture was not in question, an accomplished realist as well as an abstract artist, he painted what I think is an honest portrait of Churchill, capturing both the dignity and heroism of the service to his country, but also the vulnerability of a frail eighty year old man. Pictures of it do thankfully exist. Sutherland was mighty pissed off at it’s destruction, describing it “an act of vandalism”. Here is a pic :

But the portrait which shook me is a modern one. It’s called “Self” by a contemporary artist called Marc Quinn. It’s made of the artists blood poured into a cast of his face/head and frozen at minus 15 degrees in some sort of cryogenic sci-fi platform that you can walk round and examine. I wouldn’t describe it as grisly. But it’s powerful. That art has the ability to create a reaction is important. I’m a bit squeamish about blood, so I immediately pondered on the process of how the artist extracted the blood and over what period. It contains 9 pints! The answer = 5 months.

Quinn creates one every five years to show the effects of maturity and ageing. The first “Self” was made in 1991 (when the artist was 29) and bought by the collector Charles Saatchi. Rumours abounded that his wife Nigella Lawson turned the fridge off and the head melted into a pool of blood. But this was disproven when it was subsequently sold.

A self-portrait of the artist Marc Quinn cast in several pints of his frozen blood. Described by Quinn as a ‘frozen moment on lifesupport’, the work is carefully maintained in a refrigeration unit, reminding the viewer of the fragility of existence. The artist makes a new version of Self every five years, each of which documents Quinn’s own physical transformation and deterioration.

So… the National Portrait Gallery, you’ll love it!

After a few days to soak it up and let it sink in, I have to say this was one of the best gigs I’ve been to. Out of all Peej’s albums, her current one (Let England Shake) ranks as high as her debut “Dry” (1992) and the beautifully polished “Stories from the city, stories from the sea” (2000).
Why was it one of the best gigs I’ve been to? Well, it was at the Royal Albert Hall, truly a magnificent venue for music. But also the quality of the delivery of all the songs played, the new album in it’s entirety plus more and a near two hour set.
The songs from the new album evoke war and the experience of war told through the eyes of combatants and civilians. Also it poignantly digs into the spirit of a pastoral England, an urban England. The beauty and hardships, the wonder and sadness.  Warts and all. It’s achingly beautiful, uplifting and melancholic. Lyrically it’s just breathtaking.


The Last Living Rose
Goddamn Europeans!
Take me back to beautiful England
And the grey damp filthiness of ages
And battered books
And fog rolling down behind the mountains
On the graveyards and dead sea-captains.
Let me walk through the stinking alleys
To the music of drunken beatings
Past the Thames river glistening
Like gold, hastily sold
For nothing
Let me watch night fall on the river
The moon rise up and turn to silver
The sky move
The ocean shimmer
The hedge shake
The last living rose, quiver.


And this song, the suffering and loneliness of the dying soldier


Hanging in the Wire.
Walker sees the mist rise
Over no man's land
He sees in front of him
A smashed up waste ground
There are no fields or trees
No blades of grass
Just unhurried ghosts are there
Hanging in the wire
Walker's in the wire
Limbs point upwards
There are no birds singing
The white cliffs of Dover
There are no trees to sing from
Walker cannot hear the wind
Far off symphony
To hear the guns beginning
Walker's in the mist
Rising over no man's land
In the battered waste ground
Hear the guns firing
Incredibly, there is a video for every single song on the album. Each one is compelling. All made by a filmmaker called Seamus Murphy. Here is the vid for Hanging in the Wire. 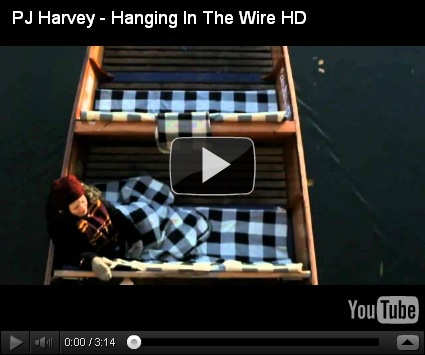 It makes me think of Paul Nash’s sensitive and harrowing World War 1 painting “We are making a new world” (Imperial War Museum). The tender and fragile tendrils of the suns rays tentatively touching the scene of devastation.

As for the gig, Polly Harvey was dressed in a black long dress, adorned with a crow feather headdress.
Here she is pictured with Mick Harvey (no relation) strumming away at her auto-harp.

It was interesting that the three lads in the band and her played some distance apart.

Managed to get all band members in one shot! (Harvey, Harvey, Parrish, Butty, Cuthbert, Dibble and Grubb) – and if you understood that joke, it makes you old like me… shhhh…

Even the massive Royal Albert Hall organ got tooted.

And the night was topped off by John from work giving me a lift to Turnpike Lane, so I didn’t have to queue up with all the (other) morlocks at South Kensington station. Although he does need to sort his satnav, kept trying to direct him to the nearest chiropracter / police station for some reason!
Posted by Mel at 22:42 1 comment: