Went for a 5 mile run this morning and this fat old guy was in my way, I politely waited whilst he waddled past the parked car to give me enough room to overtake. I noticed a big pair of jam jars over his eyes as I accelerated past him. He obviously realised he'd held me up and with no hint of irony called out "Sorry miss!".

Now I enjoy keeping fit, and as well as the obvious health benefits I wanted to lose the excess flab I've been carrying around, because I am vain and I do look at my gut in profile in the mirror often (much to the disdain of my other half). It has worked though (exercise not looking in the mirror) and I'm now much trimmer and svelte, a bit like Legolas, but with an urban edge.
Anyway, this old dude with bad eyesight thought I was girl, slim, with dark shoulder length hair. I mused on this and decided better an athletic girl than a fat 30 something bloke. Maybe I'll increase the weights though and drop a bit of the cardio-vascular now... something to think about!
Posted by Mel at 22:49 No comments:

My mate Sal recently reminded me of a time when we were spotty teenagers in ill fitting clothes and we'd just visited Forbidden Planet in New oxford street having stocked up on the latest comics. It must have been a memory I'd supressed as I'd forgotten about it.
Anyway, we were walking and talking, having spent too much college grant money on superfluous items probably discussing the latest Avengers line up and debating how Captain America could hold down a place in the roster for so long when his powers were so limited*
We walked through covent garden, and totally obliviously stumbled into some street performers comedy act. The performer put his hands on hips theatrically and drummed his fingers, the cresent shape of the crowd we had walked in front of chuckled. We stopped talking and looked up, realising their mirth was aimed at us. We had wandered into a trap, into his stage! Our Spidey sense had not tingled.
The street performer, in clown outfit and big shoes uttered three crushing words, a cheap shot, but utterly devastating to our socially inept 18 year old minds.
"Short aren't they?"
Much hilarity from the crowd, we slunked away, in deep shame. Is it our fault we are the evolutionary output of squat mountain goat herders from the balkans? What a smug w*nker.
"Sticks and stones may break our bones, but words will make us sociopaths"
To my knowledge neither myself or Sal have murdered anyone tall, but deep down, I have a deep seated hatred of clowns, tall people (although some of my best friends are tall), big ugly feet and crowds. A crowd of big footed tall clowns laughing in my face will probably set me off so don't ever test me out on this, or I will become a whirlwind of destruction and seek vengeance.
On a lighter note, seeing Mogwai tonight at the Royal Albert Hall. Should be good. Never seen them live before.
* - Compare Captain America to Thor for instance. One is a middle aged man who has good hand to hand combat skills and an inpenetrable shield (wow). The other is an immortal god, totally invulnerable, who can smash buildings with a swat of his hand, summon thunder, create gale force winds, fly etc etc. I know who I'm trusting to sort things out when Galactus is smashing up my village in Bedfordshire.
Posted by Mel at 16:48 No comments:

Went to see the Killers on Monday night at the Electric Ballroom in Camden. it was a competition winners only gig and I was fortunate enough that my mate Tommo's fiance couldn't make it. (Gawd bless her evil boss for not giving her the afternoon off). Their tour sold out in about 3 seconds, so very lucky to see them in a tiny venue. Not that I would have spent 25 quid on them in the main tour, but I was well up for this.
It was cool. In fact I have to say they were awesome. Got right near the front and my fat unshaven face will appear on T4 on a TV near you soon. Tommo took pictures on his camera phone, my camera phone packed up so I drew this picture. It is surprisingly lifelike. From a certain angle, and if you squint, you'd think it was a photograph. I'm very proud of it. By Mel. Aged 35. 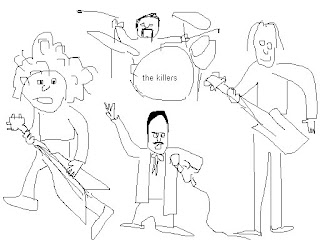 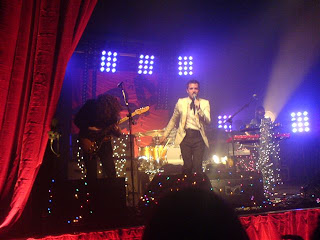 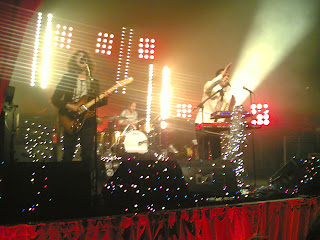