Gotta love the ICA, down on The Mall, up the road from Buckingham Palace it is perhaps the most salubriously located live music venue in London. I was offered a ticket by my good buddy Sal to see a Canadian band I am ashamed to admit I’d never heard of previously, but I trust my fellow square jawed and throbbing forearmed Mediterranean friends judgement on many matters, whether they be culinary, literary or musical. And for this I am grateful.
We arrived early to grab a couple of beers and sat in the bar amongst quirky and obtuse individuals, there to suck upon the teat of dark gothic folk. After a hastily downed gazpacho we endeavoured to enter the sweat pit. On previous visits, I have boiled into a pool of sweat, like that senator dude in X-Men when he is zapped with Magneto’s mutant ray and turns into a pulsing watery slug seeking redemption upon Jean Grey’s trestle table before slopping over the sides like four gallons of carlsberg special brew. But it seems they have installed air conditioning, which is a nice touch.
Unfortunately, Sal had to go, his brother had smashed his car up into some pensioners vehicle and thus he needed to make a mercy run to allow him access to his insurance documents.
So I watched the gig on my tod.
Timber Timbre added to the atmosphere by positioning red lanterns around the stage and as they came on to play, a projection of 1922 seminal horror Nosferatu was also projected behind them.
They are low fi, sinister and dark. Check them out. One of the opening scenes of Nosferatu below, note red lantern and hooded lead singer Taylor Kirk, grim reaper-esque.

Renfield, he’s got a messed up face.

As Nosferatu was a silent film, it’s interjected with dramatic story text. It’s of its time…. shame some lanky piece of piss baalhead messed up this shot.

And not quite this one.

And then into the night air, as yet (Wednesday), The Mall wasn’t smothered with people in tents hoping to catch a glimpse of Kate Middleton and the future Kaiser (all those shenanigans would happen Friday). So it was a serenely beautiful spring evening.

The Lost City of Dunwich

“A land that is lonelier than ruin
A sea that is stranger than death
Far fields that a rose never blew in,
Wan waste where the winds lack breath;
Waste endless and boundless and flowerless
But of marsh-blossoms fruitless as free
Where earth lies exhausted, as powerless
To strive with the sea.”
So begins Victorian wild bunch poet Algernon Charles Swinburne’s epic (as in it goes on a bit) “By the North Sea”, which is written about Dunwich supposedly.
We’ve been back from Suffolk over a week now, but there was one more blog to write. This is with regard to the lost city of Dunwich. Once one of the biggest towns in England and a foremost port, it fell into decline (and the sea) after the peak of its success in the middle ages. It all happened when the first of a succession of storms in 1286 blocked the natural harbour of Dunwich with shingle, meaning the prosperous town was cut off from it’s trade routes across the North Sea. It never recovered.
Now it’s a pretty little village perched on the natural cliff face, population of just less than 200.
There is a great little museum there with some discovered artefacts from the deep, but the main draw for me was going for a walk along with cliff face, along the boundary wall of the Greyfriars priory. How long this old ruin will hold out against coastal erosion, who knows, but it is breathtaking and quite unsettling. There is one grave from a long gone church (All Saints) still holding on against the relentless coastal erosion.
Here is a pic of All Saints (taken from this website) through the ages. Considering this was one of the many churches of Dunwich considerably inland in the middle ages, many other churches having been lost hundreds of years before, it makes you think how transient the coastline is.

And the grave? Well, residing in it is a chap called Jacob Forster. Only a few yards beyond this gravestone is the sheer cliff face, the shingle beach and the North sea. Soon he’ll be gone too.

The inscription says - IN MEMORY OF JACOB FORSTER WHO DEPARTED THIS LIFE MARCH 12TH 1796 AGED 58 YEARS.
The priory now looks like this. This is with my back to the priory wall and the cliff behind that.

And the view from the cliffs is as follows, back in Roman times, the coast was a good half mile out from this point. You can just about see a couple of people fishing by the shoreline.

We wandered down through the village where the cliff flattens down to the beach.

When I was skimming stones down on the beach it didn’t really register that I was probably treading on what once was consecrated land, the cemetary of All Saints Church or that my stones were flinging out on old property and houses lost in the muddy waters of the sea. In recent times, when another slice of cliff crumbles down to the beach, human remains still tumble into the open air.
On getting back to our holiday rental, of course I considered this and my unknowing disrespect for the dead. My fears were amplified in the big scary house and shit myself. The Fog by John Carpenter came into mind and for some reason Michael Jackson’s thriller video.
I then did some research on scary legends of the area and I have to say they are awesome. *Adopts old sea dog accent* On some nights you can hear the bells of the old sunken churches over the waves at night.
Or the most chilling, the Dark Heart of Dunwich. Scary Link.
This one stuck with me a bit. It also made me think about HP Lovecraft’s “The Dunwich Horror” which is actually set in America, but he probably named the town after reading both Swinburne’s poem and a novella “The Terror (1917)” by the Horror writer (much loved by Stephen King) Arthur Machen, which was also set in the English Dunwich. I’ve stuck it on my wishlist :)
As for modern day Dunwich, it is a gorgeous little English village, nothing horrific to report, apart from the price of an ice cream in the beach side cafe (£1.75!) ffs!
Posted by Mel at 14:33 No comments:

It lives! After Deb’s rescue mission yesterday, we were worried the cat would come back…. But looking out through our window this morning, we saw it, munching through the beautiful garden (oops). Sat outside earlier and it made another appearance, long enough for me to take this photo at x40 zoom.

Other news, walked to Walberswick from Southwold today along the embankment of a disused railway line, what a lovely village, nestled in behind the sand dunes. Sat in a tea shop gardens and scoffed stuff, then walked back, the more direct way, along the river bank, over the bridge and through the common, which has Adders in it (we didn’t see or get bitten by any!)
Pie for dinner tonight from the local deli. I chose the “Kate and Wills” pie which contains beef, red wine, shalots and a dash of brandy (sadly not made from the flesh of our future king and queen as that would cost significantly more than 4.50 – which is already expensive). I felt slightly embarrassed asking for it. Debbie got the “Heidi”, which contains Goats Cheese, Sweet Potato, Spinach and Roasted Garlic, how this equates to Heidi I don’t know, but it reminded me of the badly dubbed childrens TV programme from the 1970s. Her mate was a barefoot tramp/shepherd called “goat peter” and the other major character was her grandfather and when she said “Grand-father!” it reminded me of grange hill when that girl used to say “but Row-land” to chubby Roland Browning. And there was a posh girl who couldn’t walk as well and Heidi was her friend, being a go getting tom boy type and they all had adventures in the alps. it was shit. Here she is with some co-stars.

Amazing I could still remember the theme tune! 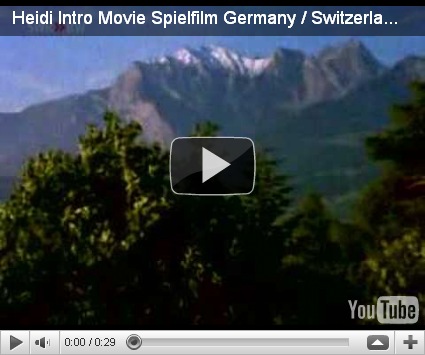 But not as shit as this, possibly the weirdest animated series ever broadcast. Pointless! it’s about an egg made of glass who thinks he’s beethoven…. or something. I just watched this 3 minute clip and it’s fuelled my childhood rage against this programme! 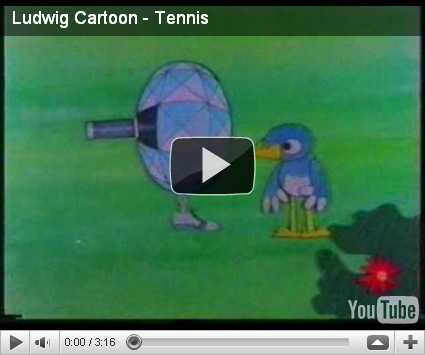 17:30 - We’re staying in Southwold at the moment, in a big house by the sea. We’re on our own now, the family have moved out, who spent the weekend with us. We had a lot of fun with the kids, playing on the beach in gorgeous tee shirt weather.  (As in the weather being gorgeous, although my tee shirt was gorgeous too). Today is a grey day however, spots of rain and a bitter wind cutting in from the North Sea. But how can you not be moved when you look out of your window and see this?

We love the sea and being near it. The sound of it through the night breaking against the shore, the salt spray, the sun rising in the East, brilliant over the waves, even the sound of gulls bickering. Suffolk is probably one of our favourite places, with Southwold and Aldeburgh our holiday destinations of choice.
The house is huge, I admit I’m a bit scared so stay in my room when dark. I don’t piss at night and uncomfortably wait till the first dull light of morning before I will venture down to pee. But other than my childlike fear of the dark and creaky old buildings groaning in the wind, this is a wonderful holiday.
Another feature of the house is the abundance of books, whoever owns or owned this place has a wonderful collection. They are learned, I am impressed. Overwhelmed with the choices I can take to the little sun trap conservatory/lean to overlooking the sea and garden I procrastinated as to what to read.
Kingsley Amis, George Orwell, M.R James, Angela Carter, Tennessee Williams, Shakespeare, D.H Lawrence, Virginia Woolf, Evelyn Waugh, Aldous Huxley, James Ellroy, Oscar Wilde, Joseph Conrad, Ted Hughes, Satre, Kafka, Greer, Kipling… to name a few.
And my choice… an old book of short stories by Jack London. An American socialist, he died young. He seemed to have an ambiguity in his perception. Sometimes vilified by both left and right, as capitalist and communist respectively and roundly condemned for alleged racist views, was he just a victim of his time and circumstances?
As to his writing style it’s warm, full of colour and vivid analogies. It always depresses me when I read someone who can create dialogue and characters seemingly so effortlessly!
21:30
Had to go to dinner, so didn’t finish this blog. Before we left, we (Debbie) had to deal with a murderous cat in our garden, which was torturing a rabbit. Yes, this rabbit is normal rabbit sized, which means the cat is the size of a puma. It was freakin’ huge!

And during dinner, we had a nutty geordie woman on a nearby table kicking off about her Bouillabaisse Sauce smothering her Halibut. She had the airs and graces of gazza after seventeen pints.
“This wasn't what ah expected leik, ah divvent even leik octopus, it should be more leik a soup yee southern bastid”
She was excessively rude and the proprietor was right to hand them their bill. But she continued to rant and rave like a mentalist on the restaurant doorstep threatening to “I'll gis a reet poor rating on tripadvisor an myek sure the lercal rag gets te knaa aboot this terrible fuud”
All good fun, but it somewhat disgusted me to hear a geordie say “Bouillabaisse”, it just sounded wrong.
Posted by Mel at 22:03 1 comment: