Last year I was fortunate enough to attend Lucian Freud’s last major exhibition at the Pompidou in Paris. There’s a blog about it in the depths of my timeline (here).
So it was with some sadness that I heard he died. He was our greatest living artist in my honest opinion.
The enthusiastic art historian Dr James Fox recently hosted a programme on the BBC called British Masters, he spoke with authority but not any pomposity about the period of British Art History 1910 – 1975. Assuming we don’t rip each other to shreds by then, he believes that in centuries to come, this will be seen as a defining period in Art, on a par with the renaissance, so his passionate delivery was a breath of fresh air.
Freud was old school, he knew, fraternised or fell out with most of his artistic peer group as well as his family. Sixty years ago he was getting drunk with Francis Bacon in some Soho dive. Within the last few years he was dancing with Kate Moss in some west London club. Even shortly before his death he was, on most nights, dining with one of his daughters in the Wolesley. As an aside the waiters laid his regular table in his honour with a black tablecloth and single candle when they heard he died – however some diners felt he had a scowl that could curdle milk should you annoy him. Next day, Dale Winton had his table, it is alleged…
Although intensely private, turning down interviews, writing shitty letters (which became so popular he stopped sending them as journalists would frame them) he led an active social life. On his own terms. It seems duty was not high on his agenda which meant he didn’t attend his mothers funeral, but that didn’t stop him being generous to those he loved. And it sounds like he loved a lot, with thirteen official children, and probably up to forty in total.
He worked almost to his dying day, a realist painter, his art recognisable from the flesh. He mostly painted from, and in, his studio. Apart from some very early works, he rarely painted an outside scene. Which is why this particular painting interested me. It’s from his garden, I can’t find the reference, so I may have imagined it, but I believe this is where he buried one of his dogs. It seems intensely sad to me. A pet’s love is unconditional, the tragic (and extremely simple) romantic in me thinks this some expression of love for a creature that has simple needs, he couldn’t handle or be bothered with the complexity of human relationships perhaps, breaking his habit of only painting indoors for old Fido or whatever his pooches name was. This is a photo of the work, by David Dawson his long time assistant.

It’s called “Painters Garden with Eli, 2006” – Eli being his last dog.
Tate Britain is currently exhibiting a few items from their Freud collection. This one particularly captivated me, it is of Harry Redknapp Francis Bacon, an unfinished piece. But getting right up close to it, you can see the incredible brushwork, Freud truly was a master.

As well as this Freud work, there is a small gallery dedicated to an artist I’d never heard of before John Craxton who died in 2009. His early work was very fluid and technically brilliant, his later work being more free. “Neo Romantic” was the term the Tate used, citing William Blake as an influence.
I really liked his work, especially the early stuff. Such as :
Hare in Larder 1943

Now Craxton, he roomed with Freud when they were studying. Craxton showed the greater promise as a youth, but Freud kicked on, whearas Craxton, although brilliant, lived the good life in Crete where he settled. Freud came to visit him and they would, as was the tradition in their friendship, exchange each others sketches and paintings at the end of the visit.
Now, Freud gambled, a lot. He generated huge debts. So much so that he sold Craxton’s painting to pay off some of these debts, with a “you don’t mind do you?” to Craxton, who was probably rightly slighted.
In later years, when the money wasn’t coming in for Craxton, he himself decided to sell a few Freud’s, they were worth a lot more money then, to raise some cash. After all, his old friend sold some of his paintings didn’t he?
The agent tasked with selling them, took the original works to Lucian Freud to verify their authenticity. Freud was not best pleased. But he verified them all right. On each, he wrote :
“John Craxton is a cunt. Lucian Freud”
RIP Lucian Freud and John Craxton.
Posted by Mel at 23:29 No comments:

Been a while, but thought I’d post a catch up blog. Back in June I saw two Japanese post rock bands live. The first, Mono, I’ve liked for a while, so it was great to hear they were performing in London.
My favourite album of theirs, One Step More and You Die, has a great track called Com(?) on it. Sixteen minutes of heaven and hell, mostly hell. Must be played ear bleedingly loud.  Listen Here :)
So me and the Bossman went to Koko in Camden, interestingly, he hadn’t really got into their studio stuff so wasn’t sure what to expect, whearas for me I was expecting a torrent of white noise to lift the whole studio sound.
Bizarrely, I was disappointed and he was lifted. I wanted them to be louder, more engaging, more animated. I wanted more lank haired Japanese “Grudge” style hairstyles flying in a blur as they went mental on their instruments, but they were too busy playing tunes, no edgy improvisation, no spraying the crowd with silver paint, no instrument smashing. They were note perfect, cannot take that away from them, but they seemed too clean and clinical. Whearas for Rob, he switched on to their incredible depth of sound. It was probably me though as I had the hump from work.
Here is a short clip (as my photos turned out rubbish) 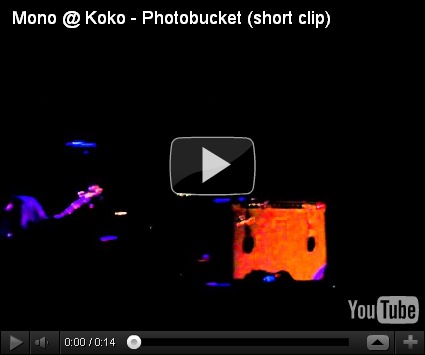 A few days later I saw Boris at ULU, as oft stated one of my favourite venues. The support act were Russian Circles who played at the Metal end of the Post Rock spectrum. They were mental. Loved them. Although my mate Sal felt they were guff, so he wandered back from the aural bombardment.
Here they are, you cannot see their heads because they didn’t have any.

Then onto Boris. Again, at the harder end of the post rock spectrum. They aren’t quiet-quiet-loud, they are more Loud-Loud-Loud-Quiet if I am to label them. They did deliver the animated crazy Japanese madness I so enjoy. Great band! In a small venue too. And the drummer had a gong, which is messed up.

Loving this pic, they look like cast members of a particularly gruesome japanese horror movie. Especially the drummer who is floating in mid air (but more likely needing to stand up to fart)

She was tiny, but could fret wank as well as any Japanese male guitarist.