Valentine's with Out Lines


Last night, Debbie and myself had the privilege of seeing Out Lines live. I’ve seen Kathryn Joseph and her musical partner Marcus Mackay twice before, when we’ve been lucky enough to have them visit London from what I imagine is their hand chiselled ice palace somewhere in the Highlands. Coincidentally, I’ve seen James Graham twice too, as front man of the Twilight Sad, when they supported Mogwai in Brixton and The Cure in Lisbon. The latter was in the biggest indoor venue I’ve ever seen, when my little niece Katerina dragged me and my colleague SJ through the crowd almost right to the front.


I much prefer smaller venues though, it’s more intimate, you can get a closer connection to the band, and they are both very expressive performers, with Kathryn’s little feral side glances while playing the harmonium or keyboard, and James’ forays away from the mike to flail and gesture and clench his fists, like a fire and brimstone clergyman behind his lectern, warning us that the end days are nigh. They would make a great fighting duo and I’m sure they could kick the shit out of me if they so chose.


If the two of them are the outward manifestation of the band’s intensity, then the beating heart is Marcus, serenely going about his business behind them, his drumming driving the warm blood through the body of the band and his soaring analogue synth playing giving an unsettling but beautiful backdrop to the magnificence of Kathryn and James up front.


All of this was enhanced by the venue, I’d never been to The Islington before and it’s great, from the staff, the bar, to the venue room adjoining it. The walls were draped in what looked like red velvet curtains, the spotlights were predominately red, it was like we were guests in a womb or a ribcage of something alive, washed with red light, listening to the beating heart of our host and its blood surging through the body of the beast.


The performance was beautiful, chilling, heart wrenching and most of all brilliant. Between songs, the bond between the band members was joyous and sometimes hilariously bawdy, the rapport between them was obvious and it was a pleasure to join them on Valentine’s night.


Out Lines were brought together to listen to and then tell the stories of people who don’t always have a voice, via a Glasgow based community art project Platform. And the album, Conflats is a magnificent tribute to those people, covering loss, abuse, sorrow but all with a layer of hope. Our Beloved Dead sends a shiver down you with the chilling “I’ll take you down with me” repeated chorus dipped in barely contained rage and melancholy. And their ABBA cover of lay All your love on me is given a dark, devastatingly sad new lease of life. 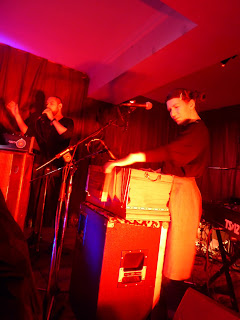 We didn’t get to say hi to Kathryn this time as we had to dash for our train, but I’m looking forward to hers and Marcus’s new album! Who knows, might catch a gig in Scotland too. And The Twilight Sad’s new album is out too. All in all a lovely date night on Valentine’s. Thank you!