The other night I went to watch the incendiary punk madness of Otoboke Beaver for the second time, the first time was at the legendary 100 Club last year, this time, at another iconic London venue, the Scala … and wow, what a show.

In a gig showcasing their record label’s (Damnably) wealth of talent, we saw three great bands. Leggy, a three piece from the states warmed things up with their fun garage rock, veering into dream pop and at times, towards a Joy Division industrial darkness. 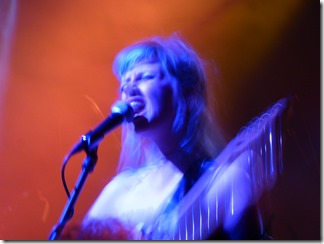 Above: Leggy’s Véronique (all photos by the author)

Next up, the warm waves of Say Sue Me, Korea’s best kept secret. Their shoegazey surf pop was like being gunned down in a fuzzy hail of heart warming Brian Jonestown Massacre soft play bullets. (lots of adjectives there, sorry). Their Blondie cover of Dreaming was lush, a slowed down layered beautiful chunk of psychedelia. Their new album is out soon and I’m sure to buy it. 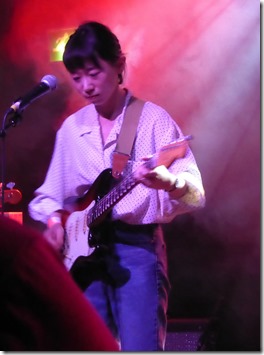 Sumi from Say Sue Me

Then the main event!

Time signature changes, jagged riffs, screams and gargles with added theatre. Rage and fierce comedy in equal measure. They are brilliant. Yes, they’re punks, but there’s something unique about their sound which elevates them above their peers. The only album I can think of which sounds vaguely similar to their thunderous debut Okoshiyasu!!, is Daisy Chainsaw’s “Eleventeen”, which shares the principle of ripping up the rock rule book and then patching it back together with rainbows and amphetamines to create a Frankenstein’s monster of terrifying beauty. 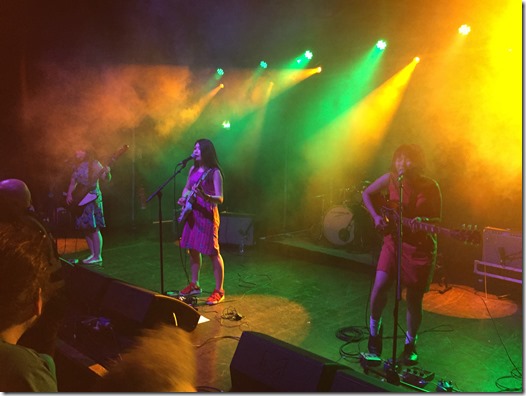 You can tell the band enjoy playing, intense Pop on drums, a nugget of dynamite pummeling the kit. Hirochan on bass, unflappable, barefooted and serene, not a hair out of place, with chaos all around her. The kabuki like elegance of guitarist / main vocalist Accorinrin, sometimes gyrating in controlled bursts of rage, sometimes subtly face acting, her giant eyes fixing any mortal brave enough to meet her gaze and instantly turn them into ash (she describes herself with “I am cute violence” on her insta, which seems apt). 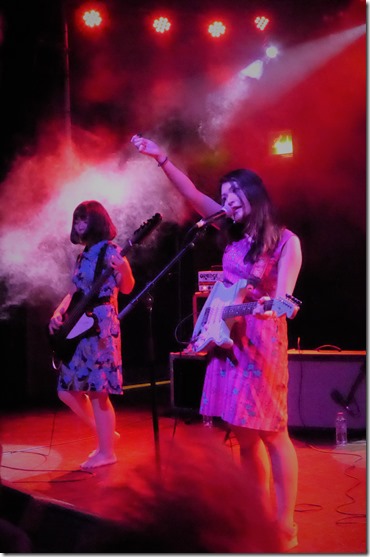 Finally there’s the force of nature Yoyoyoshie on lead guitar. Like a flaming sprite, she can run small towns via the power generated through her shredding and energy on stage (and in audience, and fire surfing on top of the audience). She holds her guitar like a flame thrower and I can still hear her war cries of “WE ARE OTOBOKE BEAVAAAAAAAAAAA!” echoing in my mind 48 hours after the gig. I imagine she is always like that. A visit to the supermarket for instance, screaming out her shopping list contents as she ticks them off. “BROCOLLI! FABRIC CONDITIONER! CHEESE!” *checks to see if it’s mature cheddar*, pause, shouts “CHEESE!” again. *Screams and runs over other customers with her trolley whilst lolling her tongue out* 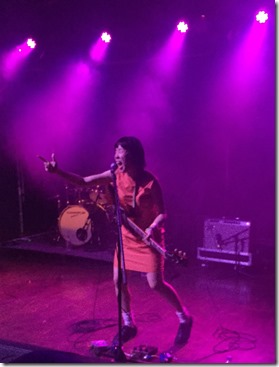 Yoyoyoshie about to breathe fire over the crowd

She is an amazingly versatile guitarist, and her teasing of the massive overly officious security guard was hilarious (they made up afterwards and had a photo together)

I think the future is bright for Otoboke Beaver, go see them, get incinerated by them, before they start playing stadiums! 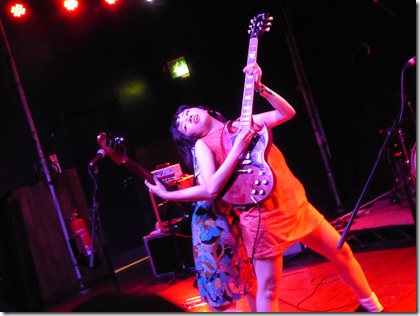 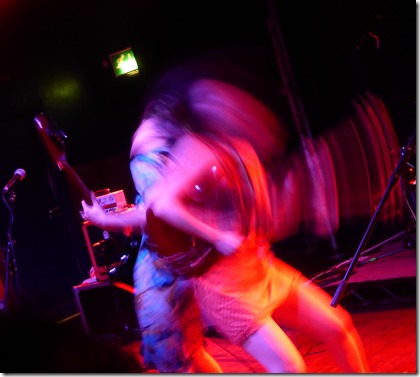 When Yoshie and Hiro play fast enough they turn into laser beams.